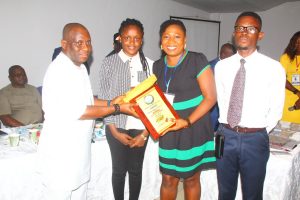 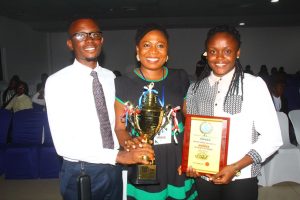 The Final of the National Tertiary Education Quiz Competition of the National Institute of Estate Surveyors and Valuers (NIESV) was concluded on 23rd June 2022 at the Institute’s annual conference at Port Harcourt, Rivers State, Nigeria.

From the results announced by Dr Uchenna Ebi, Chairman, Education Committee of NIESV and obtained by COOUNews, the Chukwuemeka Odumegwu Ojukwu University, Anambra State represented by Okpala Emmanuel and Celestine Chinemelum, scored a total of 80 marks to flaw the other Five (5) Tertiary Institutions that represented other zones during the final competition.

In a brief telephone conversation with COOUNews the elated student’s coach and a lecturer in the department, Dr Mrs Dumebi Efobi, thanked her colleagues in the Department, the Dean of the Faculty of Environmental Sciences; Prof. Leonard Moughalu, the HOD of Estate Management, Dr Mike Anyakora for their support and encouragement to the students and extended appreciation to the University management from providing the enabling environment that made the success of the students a reality.

Their qualification for the winner was made possible by emerging 1st at the South East finals held on the 7th of April, 2022 in Enugu. Consequently, they were hosted by the Vice-Chancellor, Prof. Greg Nwakoby, on the 13th of April 2022 where he urged them to aim for the final trophy and prayed for their success at the National competition.